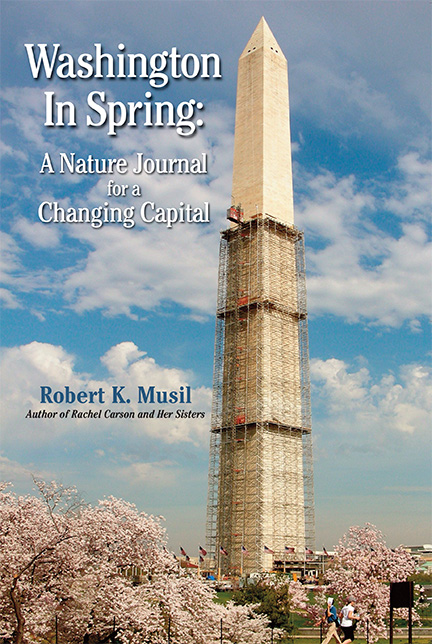 In this intimate and history-laden nature journal of the nation’s capital at its most glorious time of the year, Robert K. Musil pays homage to the noted nature writers who have explored Washington before him.

From the moment Captain John Smith and his men pulled their barge aground at Little Falls on the Potomac and hiked to the Great Falls, the ever-changing beauty and bounty of Washington in spring has captured the imagination of writers who have also been moved to preserve it. White-bearded John Burroughs, friend of Walt Whitman, attended President Lincoln’s Second Inauguration and then hiked off looking for birds and butterflies. Burroughs wrote that the areas surrounding Rock Creek should become a national park. Musil follows a similar path and that of later writers like Florence Merriam Bailey, through Rock Creek Park and finds Red-tailed Hawks, woodland flowers, and the mysterious appearance at his feet of a Pileated Woodpecker that introduces a young couple to the glories of nature in the capital.

Amidst the constant encroachment of urban sprawl and growing signs of climate change, find surprising signs of nature’s resilience and restorative powers from a bustling brood of Hooded Mergansers beneath construction at Huntley Meadows to a face-to-face encounter with a Barred Owl on the C&O Canal whose deep, black eyes commune with the creature whose eyes are magnified by binoculars.

A life-long birder and leading environmental proponent grown weary of the grind and gridlock of Washington, Musil finds relief, renewal, even resurgence in seeking out, carefully observing and feeling the beauty of Washington in spring

“A delightful chronicle of a single season in a single place that nonetheless bears on the entire planet. It belongs on the bookshelf of every Washingtonian, every lover of spring, and every admirer of the sweet traditions of natural history and close observation. A cherry blossom of a book!”
— BILL MCKIBBEN, author of Wandering Home

“I love birds. I love the secret spots of natural beauty in Washington, DC. This book explores both in an exuberant journal of spring in our nationâ€™s capital—and its changing nature. Reading the personal essays here is like walking the city with a knowledgeable friend and astute nature guide, whose musings are fueled by wonder and informed by a small cadre of historical writer-naturalists who visited the city before him, from John Burroughs and Teddy Roosevelt to Rachel Carson, Louis Halle, and Roger Tory Peterson. Underlying these observations is a deep awareness of the disruptions caused by climate change and a gentle but urgent call to do something about it— before our beloved springs, in DC and elsewhere, are forever altered.”
— JENNIFER ACKERMAN, author of The Genius of Birds