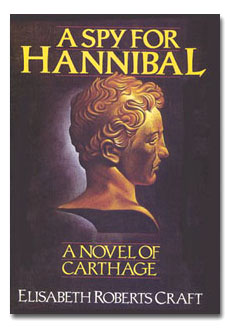 219 B.C. These are trying times for the Phoenician city-state of Carthage. Soon there will be another war with Rome. The brilliant young general, Hannibal, is preparing to advance across the Alps to approach Rome from the north. Can this bold, dangerous march succeed?

In Carthage, Hasdrubal is the high priest in thetemple of the goddess Tanit. At forty, he feels his life is at an end. And he wasn’t even supposed to be high priest. That, according to custom, was to be his elder brother, Bimilcar, who instead chose to be a soldier. Bimilcar is now at Hannibal’s side, regularly sending accounts of his travels and adventures to Hasdrubal.

As a young man, Hasdrubal was engaged to be married, but his lover disappeared with an Athenian trader. Hasdrubal never got over his disappointment.

Now his duties as high priest consume him. His nephew Hanno needs to be trained to succeed him, but the boy steadfastly resists.

And there is a new problem: complaints about a priestess, Elissa. She is fearless and insolent and defiant. No one knows where she came from and Hasdrubal doesn’t know how to restrain her influence on the younger priestesses.

Finally, a young man arrives in Carthage. He looks so much like Hasdrubal that the high priest becomes convinced the handsome stranger must be his son. It could be the answer to his prayers: an heir as high priest. But this man may not be what he seems.

One day, a message comes from Bimilcar. Someone is needed to go to Rome and obtain information for Hannibal. Because he speaks Latin and is unknown outside the temple, Hasdrubal decides to undertake the mission himself. The high priest will become a spy for Hannibal.

In Rome, perhaps, the questions of his life will be answered.