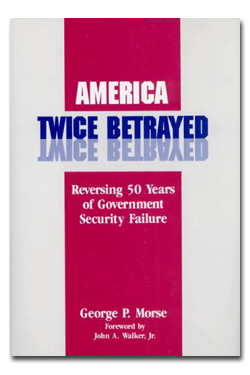 For over fifty years, the United States has failed to protect even its most vital secrets.

Each new spy scandal creates public anxiety which lasts only as long as media scrutiny.

And yet, as America Twice Betrayed eloquently portrays, the problem is not only one of individuals willingly betraying our country but of a system that cannot function effectively.

A long-time security veteran and former director of security in the Federal government, George P. Morse details not only a half century of spies and traitors, and their exploits, but the reasons and circumstances that made their treasonous actions possible.

With a fascinating chronology of events from the 1930’s until today, Morse describes, with an astute insider’s intimacy, the destruction of the government’s defense against espionage by its own people. He recounts the abuses of McCarthy and Nixon, the cynical manipulation, by officials at the highest levels, of the genuine issue of Communists in Government with the infamous “numbers game,” and the denial of due process in its aftermath and how these actions contributed to the total failure of our government security program.

Morse continues the odyssey into the 1950’s and 1960’s with his efforts to achieve a bulwark against treason with the design of a “Single Security Agency” and its recognition and interest by President John F. Kennedy.

Now, a lack of useable standards, neglect by senior management, and violations by the media, Members of Congress and even the executive branch have made America’s ability to protect its secrets impossible. In his foreword, John A. Walker, Jr. offers a fascinating glimpse into the mind of the convicted spy, and confirmation of what Morse prescribes for the safety of our country.

Enhanced by his discussion with Walker, the author provides further insights and identifies what makes a person steal his own country’s secrets and sell them to the enemy.

Not satisfied with merely describing our security failures, Morse reveals a carefully constructed solution to our problems, that goes far beyond simple tinkering with an already failed and ineffective system. In his provocative approach, he not only points the way to success, but demonstrates how to realize billions of dollars in savings over the next decade.

America is twice betrayed, by those willing to steal her secrets and by those who, by their neglect or ignorance, permit it to happen.

“This book goes beyond merely discussing current threats to U.S. strategic interests; it also identifies striking weaknesses within our system of government security and provides cogent, balanced, cost saving measures to correct many of the system’s failings.“

houghtful and well-reasoned, America Twice Betrayed is a major step toward providing a safer America.