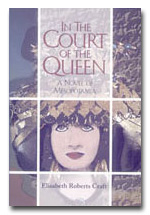 2000 B.C. The old queen of Ur is nearing the end of her days. Ten beautiful, young virgins have been chosen to live in the palace to comfort and entertain her. Hana-Ad leaves behind her rural life and enters an opulent world of lavish meals, expensive garments, and hours of leisure interrupted only by lessons in harp and dance. But what Hana-Ad does not realize is that this new life involves a great sacrifice. In the tradition of a renowned past queen of Ur, Queen Ku-bau plans for her ten lovely maidens to escort her into her tomb–and into the next world.

When Daid, Hana-Ad’s newly betrothed, learns of the queen’s plan, he vows to rescue her. A voyage to deliver tablets for Nanshe, the high priestess of Ur, takes him to the palace of the great King of Babylon, Hammurabi. Daid is confident that this will convince the king to free the queen’s maidens, but all of his hopes are dashed when the letters are confiscated and he is captured and enslaved.

Wen the tablets are finally recovered, Daid’s only route of escape from Babylon is to learn medicine, and fast. His skills are put to the test when a smallpox epidemic threatens to decimate the population. Working day and night, the only thing that keeps him going is the knowledge that his position as master physician could gain him access to the palace of Ur, if he ever makes it back.

Meanwhile, relations in the palace of Ur are strained. The old queen’s daughter-in-law will stop at nothing to gain power. Ashnan, one of the queen’s virgins, carries out cruel schemes to disrupt the harmony between Hana-Ad and the other maidens. And Uttu must thwart any attempt to interfere with her burning desire to accompany Queen Ku-bau into the grand world of the beyond.

Away from home, both Hana-Ad and Daid learn lessons about the politics of survival, the power of the gods, and the importance of friendship. But the overwhelming force that drives each of them is the undying hope that they may someday be re