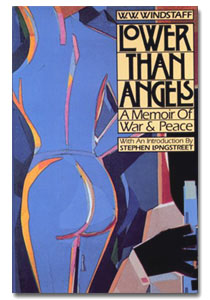 When he wrote this memoir over sixty years ago, the author planned a privately printed edition as gifts for his friends. He chose a pseudonym, W.W. Windstaff, to avoid embarrassing his socially prominent family. His true identity remains a secret.

In a unique style, Lower than Angels captures the essence of war with wonderfully descriptive passages of air combat, and life in Paris and Rome during the 1920s. Later, Windstaff vividly memorializes the expatriate experience.

More than simply a memoir of fascinating times, Lower than Angels is a raw and powerful portrayal of a man who could not overcome the trauma of war, and survived with a veneer of cynicism aided by the bottle. Lower than Angles will certainly be appreciated for its value as an historical record. It will also captivate readers with its charm, and delight a wide audience.