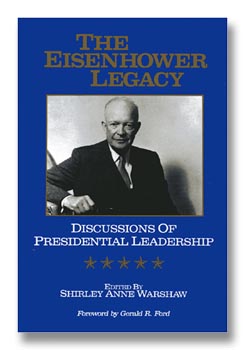 The centennial of Dwight D. Eisenhower’s birth came amid a reappraisal of this American Hero’s eight years in the White House. Among the many tributes to President Eisenhower’s memory, perhaps the most significant was a Centennial Symposium held at Gettysburg College in Gettysburg, Pennsylvania. This extraordinary gathering of former cabinet and staff, journalists and historians met for five days in October 1990 to examine anew the pivotal years of President Eisenhower’s leadership. The group offers a unique view of the Eisenhower Presidency, much of it from an “inside” perspective. They vividly disclose how executive policy was shaped and political dilemmas were resolved.

THE EISENHOWER LEGACY: Discussions of Presidential Leadership records the highlights of the exciting and sometimes surprising discussions that resulted from the symposium. Throughout their conversations, the participants reveal how President Eisenhower dealt with a wide range of crisis, including the U-2 affair, Senator Joseph McCarthy’s hearings, and the confrontation of with Governor Orval Faubus of Arkansas over school desegregation. The many first-hand anecdotes in this volume are often humorous, but more importantly allow the reader an insightful look at President Eisenhower’s personality. Never again will such an outstanding and knowledgeable group can again assemble to explore the many facets of the Eisenhower presidency. THE EISENHOWER LEGACY will prove invaluable for any future study of our 34th president.