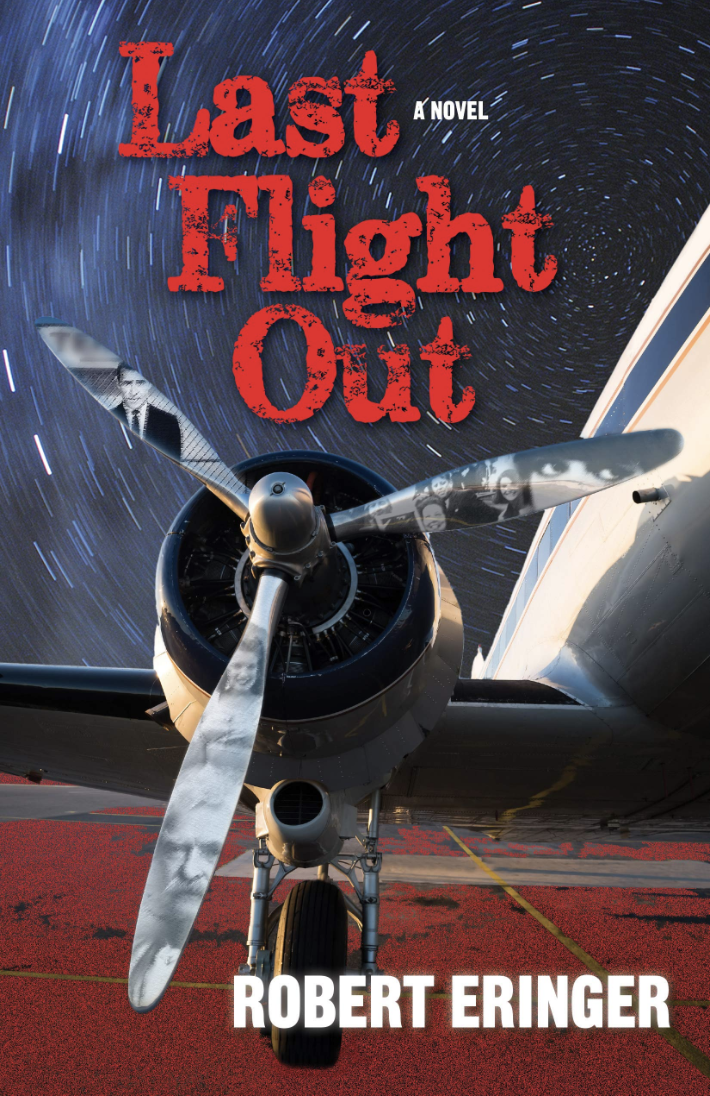 Because how many novels deal with quantum entanglement, vanishing twin syndrome, and traveling in time through photographs?

Is he hallucinating? Or is our hero actually traveling into vintage photographs? Robert Eringer takes you on a journey unlike any other, running into Mark Twain, and others from bygone eras—all the while paying homage to an iconic TV series, The Twilight Zone.

Last Flight Out is a highly imaginative odyssey unlike any other in literature and, if you’re willing to suspend reality, may be the most fun reading you may have had in a long time. Worn down by the stresses and strains of everyday life, harassed bar owner goes for a drive, winds up at the airport and, on impulse, grabs the last evening flight.

Onboard, he meets a woman in retro garb that recommends he continue to Sausalito and visit a vintage photography shop. Finding himself outside the shop while walking around next morning, he wanders in and discovers a vast collection of black-and-white and sepia photographs. Feeling for the proprietor, an elderly hippie, for whom vintage pics is clearly a passion, he springs for a photo of Mark Twain.

Much later, in his hotel room, after an evening of food and drink, the bar owner feels giddy then suddenly finds himself facing off to Samuel Clemens across a pool table. Stunned, he allows himself to be goaded by Clemens into a game of billiards—and the adventure begins.

Just as mysteriously as he traveled to New York in 1908, he is back in his hotel again. Convinced that the gallery proprietor slipped hallucinogenic drugs into a Tootsie Pop that came with the photo, he returns to the gallery to demand an explanation. The proprietor vehemently denies doing anything remiss, suggesting that every photo in his shop is an adventure, and that the nature of the protagonist’s journey is his alone.

But then the proprietor has an idea of his own: If the journey to see Mark Twain truly happened, why not do the same with a photo of President Kennedy’s arrival in Dallas on November 22nd, 1963 and prevent an assassination that, in the old hippie’s mind, causes an escalation of the Vietnam War leaving many of his friends dead and his own life in turmoil. He quickly finds such a photo, taken at Love Field, and the next journey begins…

NOW AVAILABLE ON KINDLE only $2.99