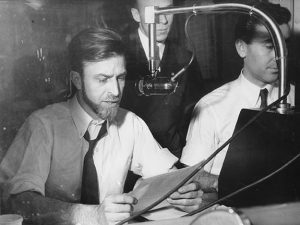 In the very early hours of June 6, 1944, radios across America came to life with the news everyone had been anticipating. First came the rumors, and then, a little after 3:30 am Eastern Time was confirmation: The invasion of Europe had begun. One widely listened-to-broadcast was from the NBC Studios in New York by Robert St. John, the legendary journalist and also our long-time friend.  We are honored on the 78th Anniversary to share the beginning of his D-Day Broadcast that day.

Jacques Haeringer, noted chef and proprietor of Auberge Chez Francois is scheduled to appear on the Newt Gingrich podcast, “Newt’s World” on Sunday, November 21, 2021. The popular restaurant, founded by Jacques father, Francois, has long been a favorite destination for anybody who’s anybody in the Washington DC area. Jacques’ two cookbooks, The Chez Francois Cookbook and Two for Tonight are available wherever books are sold.

In celebration of college football’s 150th anniversary, ESPN’s SportsCenter lists the top 10 most inspiring moments in the sport’s history. Number one? The story of Ernie Davis.
Watch a Top 10 summary HERE

For the full inspirational story of Ernie Davis, check out Ernie Davis: The Elmira Express, the Story of  Heisman Trophy Winner. The basis for the Universal Pictures file, The Express, it is available in a special Hardcover Anniversary Edition

October 14th marks the birthday of Dwight David Eisenhower, our 34th President and also one of our country’s most important generals.

In 1990, the 100th anniversary of his birth, a symposium took place at Gettysburg College involving many people who knew him best. After he left office in 1960, Eisenhower retired to Gettysburg, Pennsylvania.

The result was a book, The Eisenhower Legacy. Discussions of Presidential Leadership, edited by Shirley Anne Warshaw. The meeting — and the book reveals many little known aspects of Eisenhower and his legacy. The book detailed the most important moments of the event.

In an age where hyperbole seems to be the rule, Elisabeth Roberts Craft’s life’s story was one of many accomplishments combined with an unrivaled passion for learning. Craft began as a court reporter and was known for her unmatched speed and accuracy, affording her a chance to travel extensively. After retiring in 1982, Craft continued to travel, seek volunteer opportunities and be an active member of the Daughters of the American Revolution (DAR). She closely watched archaeological developments around the world and regularly joined site excavations.

She began writing about the ancient worlds she explored. Her first novel, A Spy for Hannibal, is set in the beginning of the second Punic War and the crossing of the Alps by Hannibal and his army. In the Court of the Queen, takes place at the time of Hammurabi, the famous law-giver, illuminates lessons about the politics of survival, the power of the gods, and the importance of friendship. The Ambassador’s Daughter, is a novel of Ancient Mesopotamia centered on the perils of a rising princess. In her final novel, I Hope I Haunt You Eternally, she delivers a story closer to her heart and nearer to our own time and . It is a most unusual tale, depicting the stunning tenacity of a deep and true love, even against the bleakest odds.

ElisabethRobertsCraft.com, showcases the published works of this extraordinary women. Although she is no longer with us, her books encapsulate her passion and gifts as a storyteller, rekindling her legacy for new generations of readers.

Today is Bloomsday where the more literary-minded drunks among us, gather to read passages from James Joyce’s most celebrated novel Ulysses and, well, drink. Of course, you don’t have to drink to enjoy the celebration of this influential book, considered one of the best of the 20th century.

The novel is set in one day–June 16, 1904–in the life of the protagonist, Leopold Bloom.

For the more information about Bloomsday and James Joyce, go here.

As our contribution to this day, we offer a brief except from  Lower than Angels: A Memoir of War and Peace written by the pseudonymous, W. W. Windstaff. He is writing about his time in Paris in the 20s.

Windstaff’s identity remains one of the great literary mysteries.

“No matter where the Americans came from, you could usually sell them a volume of Joyce. Most were not literary, but had heard it was a “dirty” book. You had to split with a reporter on the Herald who could do the James Joyce signature with a real feel, and even add a personal message. Of course Joyce, if you caught him before he got plastered on white wine, he’d be happy to sign one of the blue-covered books. He sang too, but I couldn’t make any money on that.”

Over the past thirty-five years, we had often been asked about the name “Bartleby Press.” Some people do get the obvious reference to “Bartleby the Scrivener” by Herman Melville, first serialized in Putnam’s Monthly Magazine in 1853 and a few years later included in a collection of Melville stories in The Piazza Tales.  Of course, not only is the company name a homage of sorts to Melville’s tale, it led to the name of our website BartlebythePublisher.com and this space, “The Reluctant Blog.”

To celebrate our anniversary, we have issued a Commemorative edition of Bartleby the Scrivener: A Story of Wall Street.  It includes the exact text as published in the original and is introduced by our Publisher, Jeremy Kay. He not only explains how he chose the name for our publishing enterprise, but reveals a few little-known details about Melville’s up and down literary history.

As noted in the Washington Post  Jim Rose, founder of the Jim Rose Circus and author of Snake Oil: Life’s Calculations, Misdirections, and Manipulations celebrates his birthday on December 21st.

When a spectator at a New York-Tampa game, played at the Met’s Citi Field, expressed his displeasure at a home run by Yankees third baseman, Todd Frazier, with an extended thumb down, it was seen by millions.

The gesture, seen by most people as a sign of disapproval, was soon adopted by the Yankee players to celebrate a hit or other positive play. In this way, it can be seen as a signal of defiance, sort of an “us against the world” sort of sentiment.

Yet as Professor Ori Soltes points out in his latest book, God and the Goalposts: A Brief History of Sports, Religion, Politics, War, and Art, we don’t really know what the gladiator era hand gesture exactly signified:

When a man went down, the amphitheatre resounded with cries of habet, hoc habet!—“He’s had it!” (literally, “He has it!”)—and with cries of mitte! (“Let him go!”; literally, “Send forth/away!”) or ugula! (“Kill [him]!”). A mortally wounded fighter (in other words: already dying) was not killed before the arena audience but was carried from the site to be properly killed away from public view. One fallen, but not yet fatally, would lay down his weapon if he could, and raise his index finger (usually of the left—or in Latin, sinister—hand) to ask for mercy from his opponent, the judge, and/or the crowd. If the spectators approved that he be spared, because
he had fought gallantly enough, they would signify that approval by turning their thumbs: police verso—“with the thumb turned.” But the interesting thing is that we have no clear idea of whether verso—“turned”—means turned up or turned down, so in spite of the evolution of the English phrases “thumbs up” and “thumbs down” to signify approval and disapproval respectively, we cannot with any certainty say which direction the Romans were signifying.

The Yankees players may have inadvertently gotten it right.

It’s been a year since Tom Lodge left us. Every time we listen to a song from the early days of the British Invasion, like those from Georgie Fame or the Zombies, we immediately think of Tom.

Shortly before his death, he wrote to a few of us, imploring us to do what we could keep the remarkable story of Radio Caroline and Tom’s role in  it alive.

It was a promise that we gave eagerly.  And now, a year later, we re-dedicate ourselves to that task. Today, have another look at Tom Lodge,  “The man who launched the British Invasion”